The Invisible Orange is proud to announce the World Premiere Video for Gross Misconduct’s single “A Place Of Bones” this Wednesday, .

Jesse Brint, guitar player for the band says: “The video was shot at Rain City Recorders pre-pandemic about a year ago, after the album Equinox recording sessions. The raw footage was then recently edited by Julian (Kenchenten, bass player) and friends”

Abelardo Mayoral, Owner at The Invisible Orange: “I’m very excited to have the honour to host a World Premiere video, especially if it is from one of my favourite bands, Gross Misconduct. I remember first seeing them open an international tour in 2007 and thinking they would have been part of the touring package; I was very happy to find out they were actually a local band, and in later years to be able to make friends and work with the band in many events.”

You can also access the episode directly here:
https://orangezine.com/orangezine-video-ball-episode-003/

The Invisible Orange’s orangEzine Video Ball is a music video show with interviews, updates and music videos currently focused on independent British Columbia bands, with plans to feature other jurisdictions in the future. It provides a platform for independent regional bands to be featured and promoted, in times where this is not possible through direct live shows to the fans.

Gross Misconduct is a Vancouver, BC based band, originally formed in Nanaimo, BC over 20 years ago. Their latest album “Equinox” was released in November 2018 and is available for streaming and purchasing here:
https://grossmisconduct.bandcamp.com/ 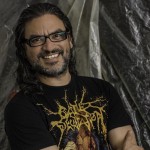