Put To Rest(Cincinnati, OH) have been busy, with two records out in the last two years, Coupe De Grace and La Vie En Rose. I had the pleasure of working with Put To Rest when they were last in Vancouver on October 29th, 2019 with Being on their North American tour. I recently sat down with Billy and chatted about their time in Canada and what they’ve been up to lately. The new single “Death Row” is now available on all streaming platforms.

How have you guys been during COVID?

It’s been a weird situation for all of us. We have been working as much as we can. We’ve also been working on a bunch of different projects individually, and it’s really opened up a lot of creative time for us. We’ve been able to write new music and it’s allowed for us to have the ability to sit and figure out what we want to do next. We’ve also become very independently resourceful, a couple of us have built our own home recording studios so we are able to collaborate easier with each other. We’ve outsourced mixing and mastering as well so we don’t actually need to be present when we’re working on that stuff. We’ve really streamlined our process.

The merch last time you were here was great, do you have anything new in the works?

For new merchandise, we have a tee that will have “Death Row” in a small run. We’re still deciding on the direction we want to take with what we’re doing right now. We’re looking into doing a clothing line type thing. I’ve always been a big fan of Bring Me The Horizon, and how they have things with Horizon Supply. We want to set up our merch in a more professional way so that’s what we’re looking into right now.

What is your favourite memory from tour?

Food-wise, the eclairs in Canada were amazing. The experience of being somewhere new everyday, meeting new people and all the different conversations and learning where people come from, their background and how they got to where they are. Also, seeing people hear us for the first time and gravitating to our music was incredible. A couple things we used to do, we would have little games with each other, for example one day we played family fued. We also had a DVD player in the back of the SUV we had so we would go park somewhere and we would have horror movie nights. In Canada we went to a bunch of cool arcades, we either went to a mall or an arcade everyday on tour. But overall, the people were my favorite, lots of characters.

Do you plan to come back to Canada when restrictions are lifted?

Ideally, yes. Hopefully when its warm though, last time it was October, and it was so cold. It was still warm in Ohio, so I didn’t pack any pants. The photo we posted in the mountains i made our guitarist crop the photo because I had my flip flops on. So next time hopefully we can make it out when its warmer up there.

You’ve just released a new single, what is the inspiration behind the track?

So “Death Row” is realeased July 24th. I go through weird moments where I get inspired by little things. Death Row Records inspired the title for the single. It was supposed to be about over dramatizing quarentine, but it ended up becoming a story and the concept it about someone being buried in the consequences of their actions. and knowing that your fate is sealed and that what you did was wrong. It’s kind of a grim way of looking at a situation.

Are you working on any other recording?

We dont know if we want to do an EP or an album. Right now we have plenty of time tot figure that out. Everyone is so overloaded with content right now because everyone is able to make it. It has to stay in your head. Like how long ago was Tiger King, it feels like so long ago, but it was only in March. I want to stay consistent and stay present and make sure people know that we’re working.

Make sure your prepared, financially and mentally. It’s not for everyone. If you’re a person that can’t be too far away from home don’t do it. Make sure you have a safety blanket. A big misconception is that you’ll make money on the road. Most of the money you make should go back into the band. You can’t be afraid to spend your own money. At planet fitness you can get a day pass and they’re open 24 hours, then you can shower and work out and don’t stink up the van. Overall, just be prepared.

Check out Put To Rest on all major social platforms for more information on the latest releases, merchandise, and news! 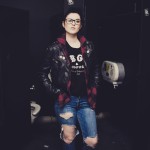