Vile Creature (Hamilton, ON) has entered their sixth year as a band, and is on the brink of releasing their third full-length album, Glory, Glory! Apathy Took Helm! From the agonizing cries of A Steady Descent Into the Soil (2015) to the soaring cleans of guest vocalist Laurel Minnes on A Pessimistic Doomsayer (2016), Vile Creature has explored challenging subjects through diverse musical languages. On their newest release, Vic (drums and vocals) and KW (guitar and vocals) continue their evolution with an ambitious foray into new territory, both musically and thematically.

CK: I was very excited to hear the new track–love the Suspiria vibes of the video. How would you situate Glory, Glory! Apathy Took Helm! in relation to the rest of your discography?

Vic: In a lot of our work, we’ve been able to collaborate with some wicked people. We’re a two piece so we’re trying to figure out ways to keep it interesting for us sonically with drums and guitar. KW’s a gear nerd, so he’s always fiddling around with different pedal combinations. He prides himself on new depths of gross.

Vic: it’s not like we know where we want to go with whatever we’re writing. I just feel like we like to write long, emotional pieces, so we don’t really have a theme when we’re like figuring out what we’re going to write about. We have these pieces of music that we’re putting together that are really long, and it’s like putting together a jigsaw puzzle.

KW: Going into writing the first record, we knew we were going to talk about personal experiences. Going into our first EP, we knew we were going to write about escapism as a whole. With the last record, A Cast of Static and Smoke, we knew from the get-go that we were writing a short story and we wanted the record to be a companion to the story. Every time, we would always have the frame of the house, and then we would build the walls and adorn it. I feel like this time we actually blew up the plot of land and fully started from the beginning with it. We kind of came in and just started writing music and working on it, and once the music was done we really honed in on what we wanted it to be about. I feel like this is the first time where the lyrical and emotional content was derived from the music as opposed to being two things that were parallel and then kind of intersected at the end.

Vic: For the lyrics, we ended up going to like a treehouse in January which was really nice. We had all the music so we were like, “We have like an hour’s worth of music to write lyrics for so we really need to just like lock ourselves in a fucking treehouse and do this,” and I think it was a good setting.

KW: The title track of the album is the most out of our station thing we’ve ever done, and it’s also the thing that I’m musically most proud of that I’ve ever done period. I am a big musical theatre nerd, so it was very huge for me.

Vic: I’m very proud of you for writing that. When you were working on it with just guitar, it was cool to see that you had a very solidified idea, and then with working with Laurel, it came together. You had this vision, and it’s a reality now. That’s what’s cool about being a two-piece: not feeling like too limited by being a doom metal, stoner, or weird sludge metal band. Being in a certain genre has never really meant a lot to us. I guess we’re experimental doom now? I’m into that because it leaves the door open.

KW: We’re generally heavy and slow. That’s the launching pad, and everything else is within reach.

CK:  In terms of the concept behind the album, I was really interested in this crusade against nihilism. Could you speak to that?

KW: Vic’s going to be way more eloquent than I am, so I’m going to give the blunt force trauma and then Vic’s going to nurse it back to health. I think nihilism is fucking boring, and if it’s the thing that you identify most with as a person, your personality is a wet mop. It’s dumb not caring about things–it isn’t cool. Thinking that the world is the worst and it would be better if everyone was dead is selfish and stupid. It’s the lowest thought process that you can have in my opinion. 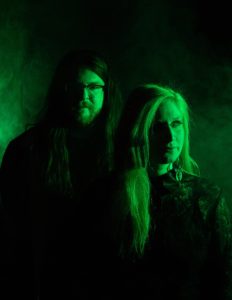 Vic: It’s pretty easy to fall into a lot of dark thoughts, and the only experience we have to understand the world is through our own self, so it’s hard to get out of that. I feel like apathy and nihilism —

KW: They go hand in hand.

Vic: Yeah, they do. It makes you not have any imagination for the wonders of the universe outside of the self. Death and dying and nothingness are fucking scary, but we need to figure out ways to look outside ourselves and see the beauty in it. What do you have to lose in being a decent human being?

KW: And to fucking care.

Vic: Yeah. It’s hard sometimes, and battling that is maybe a lifelong thing, but I feel like it’s a lot more rewarding to do that instead of falling into this individualistic bubble of not caring.

KW: You don’t have to turn in your battle vest the second you start caring. You’re allowed to keep it you know.

Vic: Yeah. I do think that in metal, visually maybe it’s appealing to people. Like, aesthetically, nihilism is a theme that goes hand in hand with genres like black metal. I don’t know, I’m talking out my ass. Metal purists are going to come for me, but I don’t know, it’s cool to care.

KW: And I think that there’s an important distinction to make: having depressive thoughts, being depressed, and having those types of “the world is not worth it” feelings is not what we’re talking about. It’s about moral nihilism, and, to me, people opting into and making a conscious decision to preach nihilistic tendencies is complete bullshit. As far as apathy goes, which is the thing we are specifically talking about, it’s so easy to fall into negative headspace, and it takes real fucking effort to combat it, but it’s effort that’s worth putting forth. That specific thing is kind of a thesis for what we were talking about. The title of the record is super tongue in cheek.

CK: It’s cool to see that perspective in your work, especially when we see how the romanticizing of moral nihilism can create a faux apolitical attitude in the scene.

Vic: Yeah, that’s a good point. It just gives people the excuse to not care about everything, whereas we are just like “let’s not do that.”

CK: I’ve noticed that you both centre your queerness in how you present Vile Creature (for example, the “angry queer gloom cult” descriptor, which is great). Could you speak to this choice? 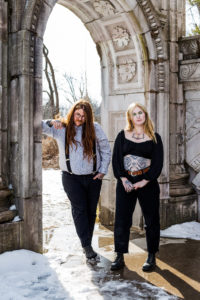 KW: We are who we are, and while our queerness doesn’t define us, it’s definitely a guiding lens to how we see the world.

Vic: I think it’s still important as ever for us to identify as a queer metal band, because I want to be part of that community, and I hope it encourages other folks to find eachother.

KW: I was just reading the first interview we ever did yesterday with our friend Ed for the zine Black Metal of the Americas, and it was a few months after we started being in a band around six years ago. We had played about five shows at that point, and all the shows that we had played had been with queercore or noise acts because there were no queer metal bands to play with, or like really out-there political-leaning bands. When we started, we were just like “fuck yeah, we are political as people, we are proud of who we are,” so we were like “let’s build a lighthouse on this island and see who comes.” It’s cool to be at a point six years later where it’s not weird to see like anti-fascist or anti-oppressive or queer bands in the metal genre.

Vic: We still identify as queer metal and whatnot because we want to be part of that community.

KW: Angry queer gloom cult was something that we came up with I think in our first year as a band, and we were both just like “yeah that’s a fun statement.” It’s really stuck, and we stand behind it. We’re not very angry as people, we’re not very good cult leaders, we do like metal, and we are queer, so I think, like, batting 500 gets you in the Baseball Hall of Fame.

CK: I also play in a doom band that’s pretty queer (Tribunal), so it was great to see that descriptor. We were actually offered to play with you in a couple weeks in Vancouver, but of course, that’s not happening.

KW: Right! Right after Northwest Terrorfest, we were supposed to play a midnight show at Pub 340.

Vic: Yeah, that would’ve been fun!

KW: But instead we will sit here covered in blankets.

CK: Well I hope to see you on the west coast someday in the future! Thank you for the chats, and all the best to your cats and dog.

Glory, Glory! Apathy Took Helm! will be released by Prosthetic Records on June 19th, 2020. Watch the video for the single “You Who Has Never Slept” on Kerrang: https://www.kerrang.com/the-news/vile-creature-release-new-song-you-who-has-never-slept/

This interview has been edited for length and clarity.